Throughout the years, we have had numerous clients and presented multiple themes for website design. Below are some samples of our work.

Note that, due to a confidentiality agreement, our work on the Chicago Community Trust Intranet can not be shown here. 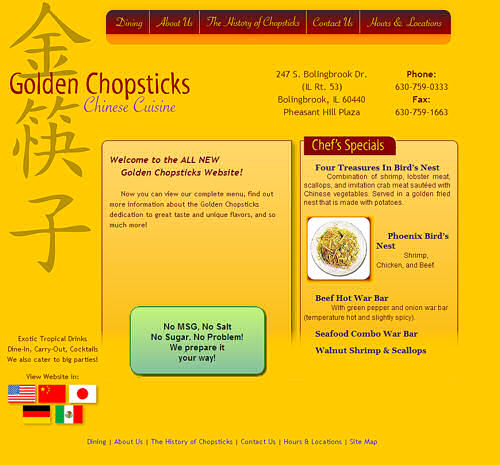 We approached the owner of the Golden Chopsticks Restaurant in Bolingbrook, Illinois with this concept for their own website. The owner at the time was not interested. However, they were inspired to later use a different design firm and now operate http://goldenchopsticksonline.com – which has no affiliation with Krak’d E’rth Productions

For the Galesburg High School Class of 1993, we created an archival and planning website, to better coordinate Class Reunions. This site was taken down by Yahoo when the GeoCities domains were eliminated. However, an archived and no-longer updated version of this site is viewable here: http://www.geocities.ws/galesburg1993/index.html 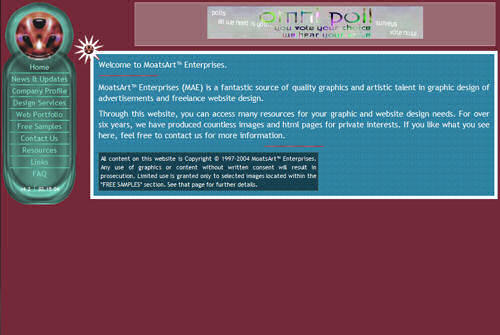 Little-known fact: Krak’d E’rth Productions was originally known as MoatsArt Enterprises. The website seen in this image no longer exists but included most of our library up until the point at which Geocities was dissolved, After extensive restructuring and a brief hiatus, our company has returned, with a new name, a new style, and great focus on providing solid design services at affordable prices.

Xoandre, the President of Krak’d E’rth Productions, has worked on new visual concepts for both his and various client websites. These are proposed themes. 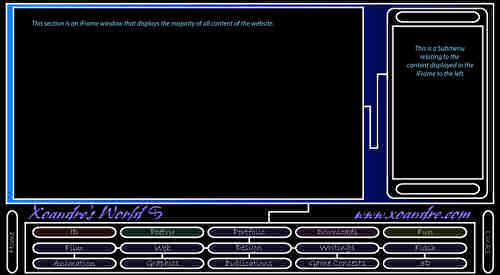 This computer interface concept is loosely based on several inspirational designs, including the original Broderbund classic Apple II game: “Where In The World Is Carmen Sandiego” as well as a more cubist version of the Star Trek computer interfaces. The bottom panel involves a Flash control panel and the top left panel displays all content, while sub-menu items appear in the right panel. 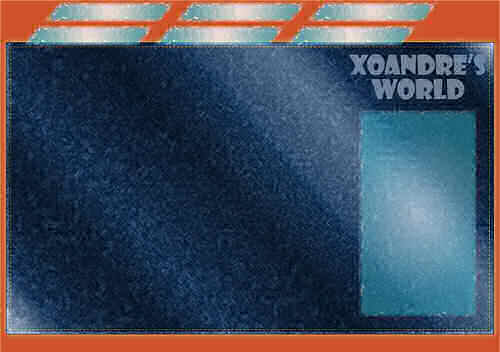 At Krak’d E’rth, we specialize in visual design, with the understanding that function and content need not be displayed in a boring fashion. This “Denim” design incorporates color theory and use of CSS Transparency.

In an attempt to break the boundaries of hard, ninety-degree angles which dominates the web, this concept involved javascript menus and hidden content.